Despite an unprecedented year due to COVID-19, including necessary public health restrictions and uncertainty  surrounding the economy, Greater Toronto Area REALTORS® reported over 95,000 home sales in 2020 – the   third best result on record. The average selling price reached a new record of almost $930,000.

“The Greater Toronto Area housing market followed an unfamiliar path in 2020. Following the steep COVID-induced drop-off in demand during the spring, home sales roared back to record levels throughout the summer and fall. A strong economic rebound in many sectors of the economy, ultra-low borrowing costs and the enhanced use of   technology for virtual open houses and showings fueled and sustained the housing market recovery,” said Lisa   Patel, Toronto Regional Real Estate Board (TRREB) President.

Highlights from 2020 include:
• 95,151 sales were reported through TRREB’s MLS® System – up by 8.4% compared to 2019. This included a record result for the month of December, with 7,180 sales – a year-over-year increase of 64.5%.
• Year-over-year sales growth was strongest in the GTA regions surrounding Toronto, particularly for single family home types.
• The average selling price reached a new record of $929,699 – up by 13.5% compared to 2019. This included an average price of $932,222 in December – a year-over-year increase of 11.2%. The strongest average price growth was experienced for single-family home types in the suburban regions of the GTA.
• After a pronounced dip in market activity between mid-March and the end of May, market conditions improved dramatically in the second half of the year, with multiple consecutive months of record sales and average selling prices.

“While the housing market as a whole recovered strongly in 2020, there was a dichotomy between the single family market segments and the condominium apartment segment. The supply of single family homes remained constrained resulting in strong competition between buyers and double-digit price increases. In contrast, growth in condo listings far-outstripped growth in sales. Increased choice for condo buyers ultimately led to more bargaining power and a year-over-year dip in average condo selling prices during the last few months of the year,” said Jason Mercer, TRREB Chief Market Analyst. 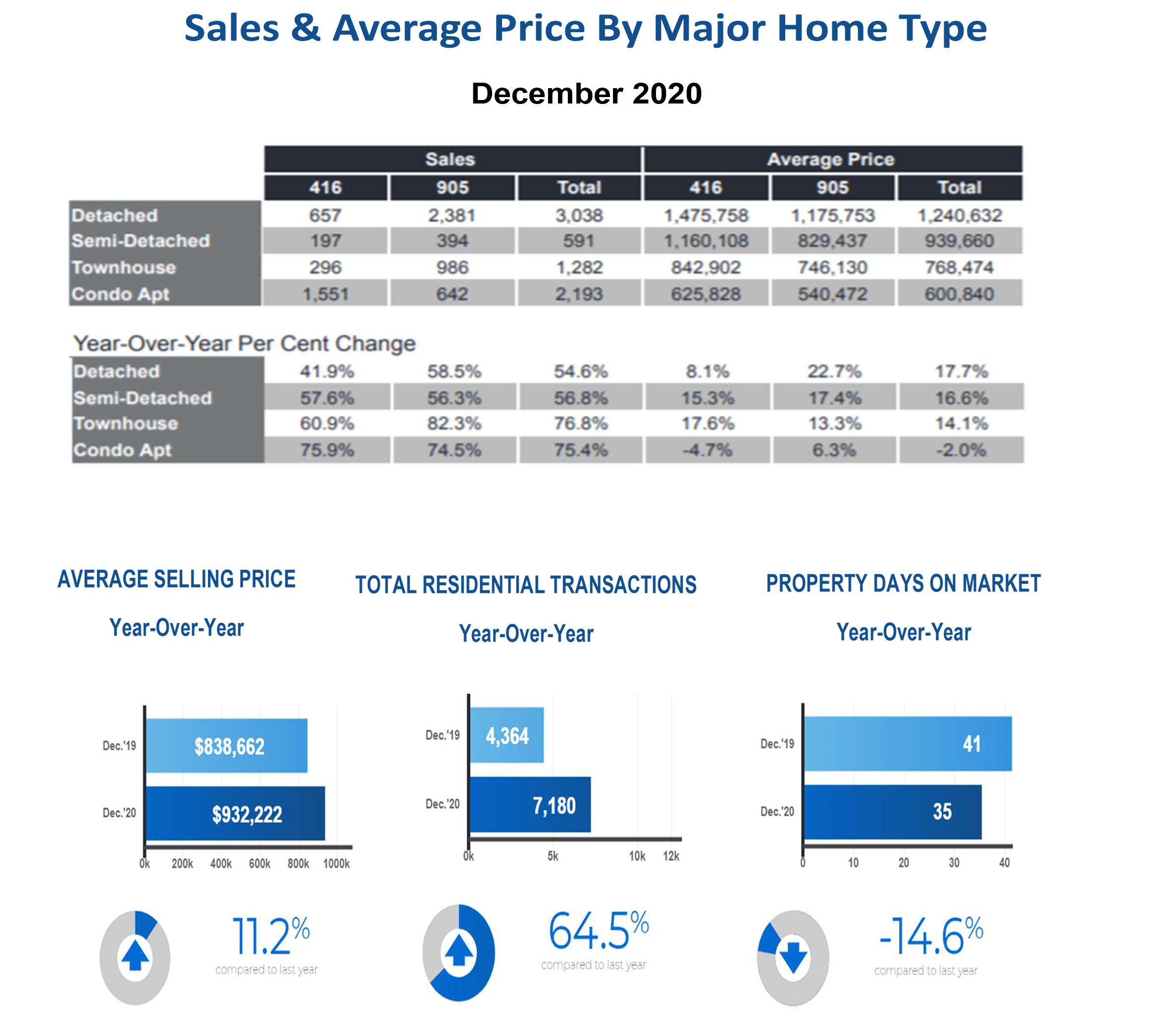 To continue searching, you must agree to the Terms of Use.

For the best experience, please provide your cell phone number and select accept below to opt-in to our Terms & Conditions and Privacy Policy to begin receiving text and voice communications.

or make a new notebook

The Toronto MLS® requires registration to view all homes currently for sale.
(Prices and inventory current as of January 26, 2022)

Have a house to sell?

Find Out How Much Your Home Is Worth (optional)

We just need your phone number to finish creating your account.